A total number of seventeen (17) unviable SLPEs and two Industrial Units of another SLPE were declared closed by the State Government. This was done over the period between 2005-06 to 2010-11, to improve the performance of the SLPEs and to prevent further drainage of State Exchequer under Assam Government Public Resouces Management Programme  (AGPRMP)

An amount of Rs 481 crore out of Rs 615 crore was disbursed to the closed SLPEs and 6062 released employees under the VRS policy of the State Government. To complete the closure procedure of 14 unviable PSUs & another two units of ASIDC, Public Enterprises Department actively carried forward the reform process to ensure release of employee liabilities, VRS benefits including CPF dues, updating of accounts, maintenance and disposal of assets of closed PSUs.

A Task Force has been constituted for Public Sector Reforms. They have been reviewing the matter of disposal of assets and allotment of land of few closed PSUs for various productive as well as alternative use. They have agreed with the transfer of land of closed PSUs to the department of Industries & Commerce for creation of land bank to promote investment in the State. Major policy initiatives were taken during this review period such as:

As per recommendations of the Pay Revision Committee, SLPEs were classified into category A,B,C & D for implementation of pay revision during 2010-11.

During 2010, Public Enterprises Department introduced a scheme to confer awards to the best performing SLPEs and its employees. This encouraged the SLPEs who were performing well and contributing to the overall growth of state economy. In 2012-13, PE Department conferred awards to the state PSUs in various sectors like Best PSUs, Best MDs etc. For next gradation of SLPEs into category A, B,C & D and for conferment of award, a self assessed performance format was developed taking 14 parameters.

With a view to improve the performance of the SLPEs, Public Enterprises Department has initiated the process of re-institutionalisation of Memorandum of Understanding (MoU) System. Four (4) Institutions of national repute were engaged to conduct a study on framing of MoU between SLPEs and Govt. of Assam and on Training Need Analysis for the SLPEs. 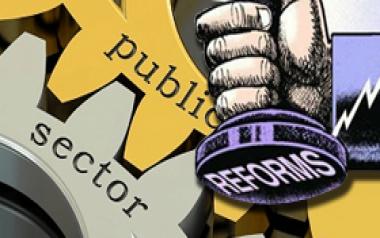